The life and times of Vincent van Gogh 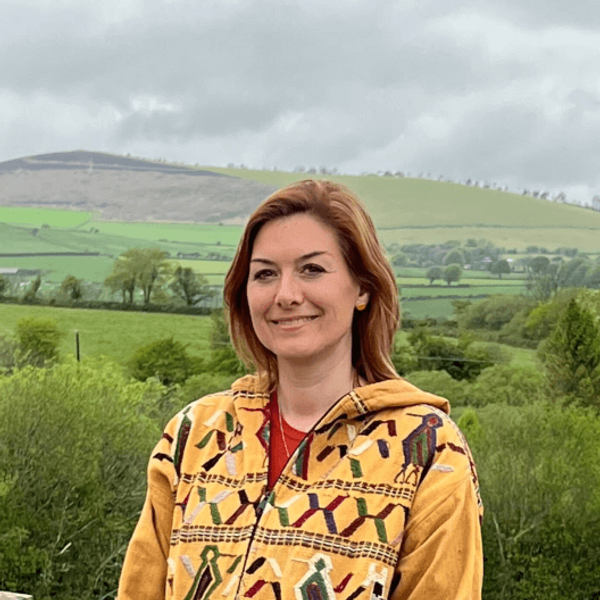 Join us in celebrating the remarkable life and art of Vincent Van Gogh to commemorate his birthday today, 30th March!

We are pretty sure you will have heard of the magnificent artist Vincent Van Gogh, but even if you don't know the name, you will recognise his dazzling Sunflowers or Starry Night oil paintings. There is a lot more to this chap than cutting off his ear, so if you want to learn a little more about the complex and hugely influential artist born on this day in 1853, then keep on reading... 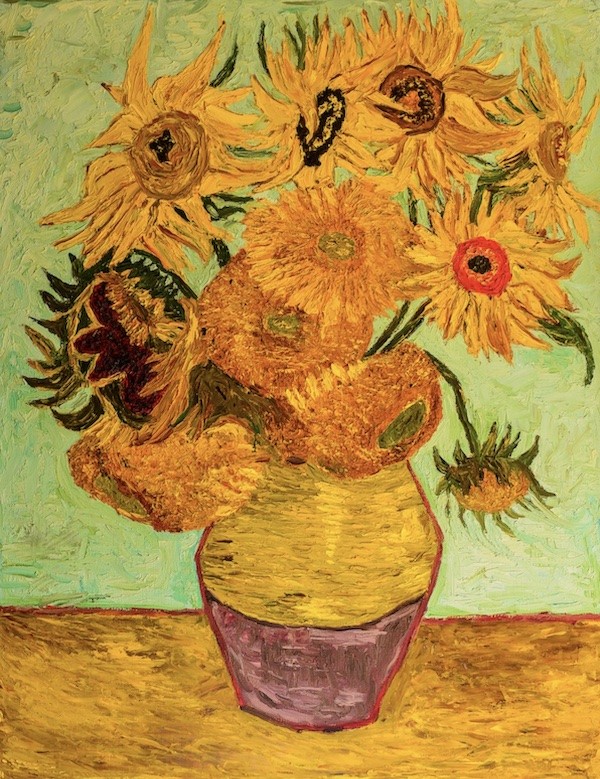 How is "Van Gogh" pronounced?

First things first, let's get the pronunciation sorted so we can all feel confident to talk about this genius, perhaps even at by learning alongside a real life artist or taking that art class you've always secretly fancied...? I think we can all manage 'Vincent', so what about the Van Gogh bit?

In the UK: Van Gogh is pronounced "Van Goff" (can you feel the Dutch give a collective smirk?)

In the US it is even worse, as they say "Van Go" (sounds a little snooty and is still wrong!)

In the Netherlands, the fatherland of Van Gogh, they say "Van Ghhh - ou - ghhh" . Hmm, I know ?. The beginning and end sounds of the "Gogh" word sound the same; a "Ghhhh" noise that happens in the back of the throat. Hard to describe (let alone say) but it's almost as if you are about to say a 'Ghhh' on its own but then decide against it. The Dutch in general use this to their great advantage and enjoy their 'secret' language to the max. My husband at least takes huge delight in overhearing Dutch tourists here in Wales and then shocking them by joining in their conversation... small pleasures.

To practise this strange (but correct) series of sounds, please watch this wonderful short Dutch clip here. Having lived with a cloggie for 10 years and still not got this quite right, I myself might be sticking to the UK version... 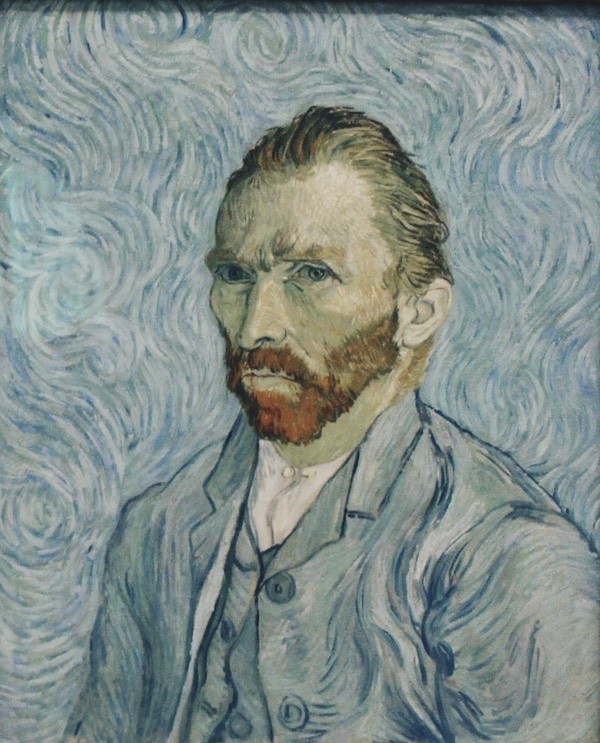 So many self-portraits exist ('cheaper than models'). The original of this hangs in the wonderful Van Gogh Museum in Amsterdam (Unsplash). I love the depth and feeling in this one, although it also makes me feel sad for the man.

As for many artists the world has benefitted from, life had its hardships. Van Gogh's huge legacy and importance to the foundations of modern art was tragically only recognised after his death at just 37 years of age. Years of poverty, ill-health and depression lead this thoughtful and misunderstood genius to suicide in 1890. A tragedy if ever there was one.

Vincent van Gogh was born in Brabant in the Netherlands, the very region where my Dutch husband grew up, and his (Van Gogh's) father was a preacher at the Dutch Reformed church there. Born exactly a year after his still born brother (also named Vincent) his birth was followed closely by that of his brothers Theo and Cor, and his sisters, Anna, Elisabeth ('Lies') and Willemien ('Wil), the youngest and one who remained close to Van Gogh throughout his life.

Sent against his will to boarding school at the age of 11, Van Gogh became deeply unhappy and let's face it, who wouldn't? Finally, his uncle found him a trainee job at an art dealer Goupil & Cie when he was 16, a job he enjoyed and that took him to Stockwell in London for a period. His uncle would continue to play a positive role in Vincent's life as would his brother Theo, who championed and supported Van Gogh throughout his short life and beyond.

With little direction, the next several years saw him lose the art dealer job, work as an unpaid teaching assistant, in a bookshop and also fail the exams of an attempted study at Amsterdam University. Under the financial support and advice of his brother Theo, Van Gogh eventually moved away from the family home and his (perhaps understandably) exasperated parents and based himself in Belgium to concentrate on his art. Phew! 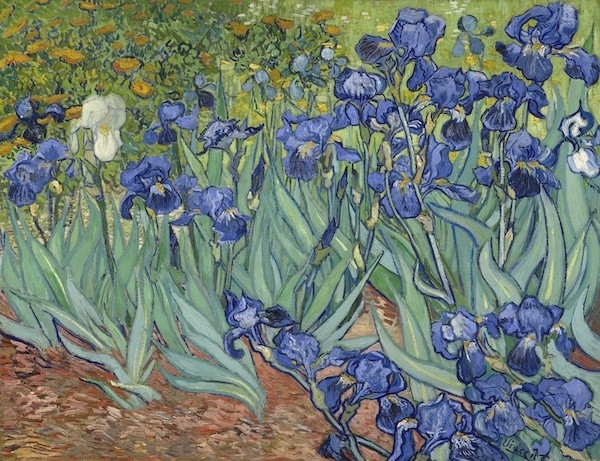 From A Field With Irises Near Arles, 1888

The early years in art

Vincent left the Netherlands after his father died, never to return. After a stay in Antwerp, where Van Gogh graduated at the Academy of Fine Arts, he joined his brother Theo in Paris and his work began to grow steadily brighter under the influence of modern art. The themes he painted developed into lighter, rural scenes and he quickly discovered a new source of inspiration in Japanese woodcuts which heavily influenced his work with their bold outlines and colour contrasts.

Existing mainly on a diet of tobacco, alcohol and coffee, Van Gogh's health was poor and he shifted to Arles in the South of France in 1888, where he was delighted by the picturesque rural landscapes - and his most prolific period commenced. In this two year period between 1888 and 1890, the year he took his life, he painted over 300 artworks (nearly 3 a week!).

His style became looser and even more expressive, more free. His yearning to build a community of artists around him saw him rent the ‘Yellow House’ on Place Lamartine situated near to the River Rhône.

Paul Gauguin was the first – and last – artist to move in with him. He arrived in late October 1888 after considerable efforts from Theo financially. The pair worked hard together and their collaboration resulted in some exceptional paintings and development for Van Gogh into the art we recognise today. 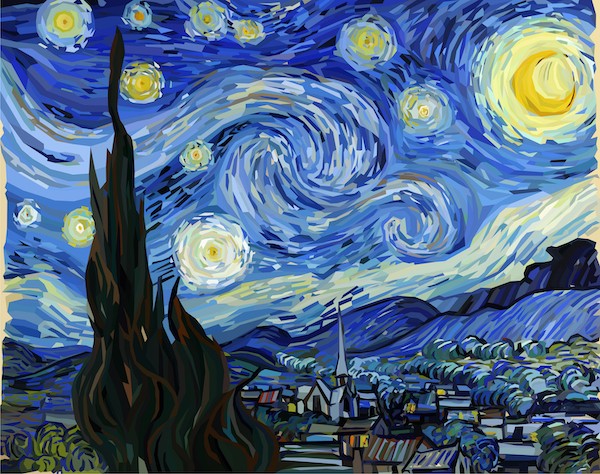 Vincent’s dream of a shared art studio was short-lived, when perhaps the most famous period of his life commenced. Controversy exists over whether Gauguin took the razor to Van Gogh's ear or whether he did it to himself, but whichever is true, they both kept schtum on the subject; Gauguin perhaps to avoid a criminal case and Van Gogh in a possible attempt to keep his beloved friend.

From this point on, Van Gogh's mental health fluctuated wildly and within a year he had voluntarily admitted himself to the psychiatric hospital in Saint-Rémy de Provences. Now, I have visited this beautiful place and despite his inner tumult, Van Gogh was at least facing it within a truly divine setting. You can see many of the views from his bedroom window of his most famous paintings and the alley of irises down the side of the lane remain exquisite. Van Gogh spent a year in the 'sanatorium' and produced over 150 paintings including the beautiful 'Almond Blossom' that he painted for his brother Theo and his wife Jo after receiving the announcement of their first-born son, a nephew also named Vincent. A symbol of hope and new life for Van Gogh, this painting now hangs alongside many other of his masterpieces in the Van Gogh Museum in Amsterdam. 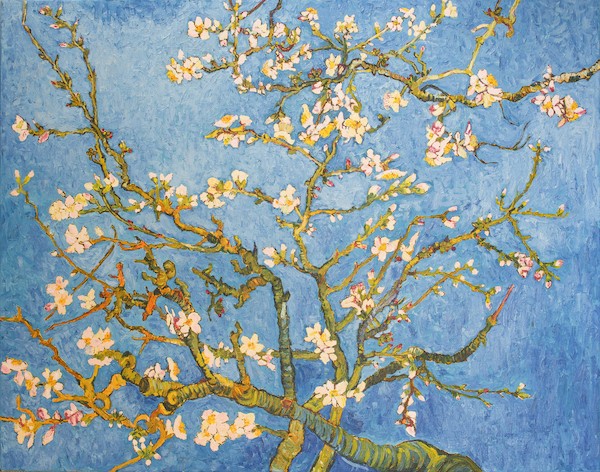 Towards the end of Vincent's life, his works were beginning to gain some recognition and appreciation. Theo had for years been submitting his paintings to the annual ‘Salon des Indépendants’ in Paris. Ten of Vincent’s works were selected for inclusion in March 1890 and 6 of his paintings were shown in Brussels in early 1890 at a group exhibition of the Belgian artists’ association ‘Les Vingt’ (‘The Twenty’).

The last months of Vincent's life were spent in an artists' village near Paris, where he made new friends and he threw himself into painting. The tale of his mental health sadly, did not improve and although some would say he had finally realised his dream, he took his own life in the July of that year, having just completed his final masterpiece: Wheat field with crows.

His brother Theo became ill and died just 6 months after Vincent, but in true family style, Theo's widow Jo, took up Theo's role as protector of Van Gogh's art and continued to raise public awareness of Van Gogh's paintings in various ways, including exhibition loans to museums all over the world.

Following Johanna’s death in 1925 the art collection passed to her (now grown) son, the engineer Vincent Willem van Gogh, who loaned his uncle’s paintings to the Stedelijk Museum in Amsterdam in 1930 and eventually transferred the Van Gogh collection to the Vincent van Gogh Foundation who then set up the Van Gogh Museum in 1973 to ensure that the collection is accessible to everyone forever. 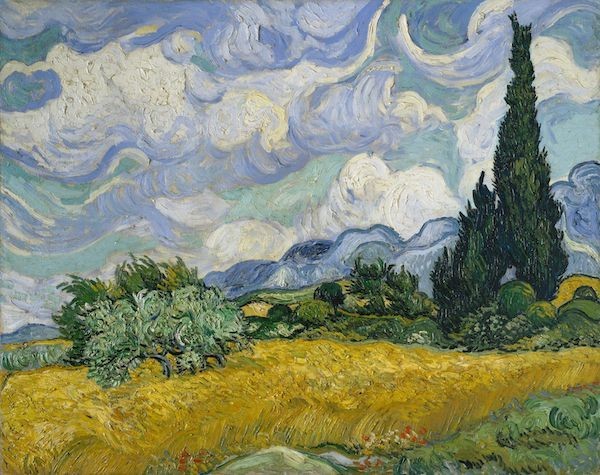 The legacy lives on

A family of immense talent and courage, the great-grandson of Van Gogh's brother Theo, also a Theo Van Gogh, was a film maker who was assassinated whilst riding his bike to work in the Netherlands in 2004, following a film he had made campaigning for freedom of speech. The murder sparked outrage across Europe, I remember well the shock on hearing of this event during my college days in York. The relative recency of this murder brings alive for me the very direct link we all hold with our forebears, not just in blood but in art.

If you want to find out more, or to visit exhibitions with Van Gogh's work then you can visit the original museum, created by the Van Gogh family, largely due to the competence of Van Gogh's sister in law Jo:

Or see his artwork in an immersive experience in London:

Also available in York or Leeds:

To visit the sanatorium in St Rémy:

The legacy of this genius is magnificent and impossible to under-estimate, but I personally love the simplicity of this quote to remember him by. For me, this speaks of his battle with his mental health, his attempts to seek and find the beauty in life and his magnificent creations that reflect the abundance and divinity of our Earth.

“If you truly love nature, you will find beauty everywhere.”

Fancy taking up drawing or painting so you can unleash your inner genius (or just develop an enjoyable hobby)? Browse several hundred in-person, live-online and kit based ART experiences here.

Oh and many happy returns Vincent, you beautiful soul. x 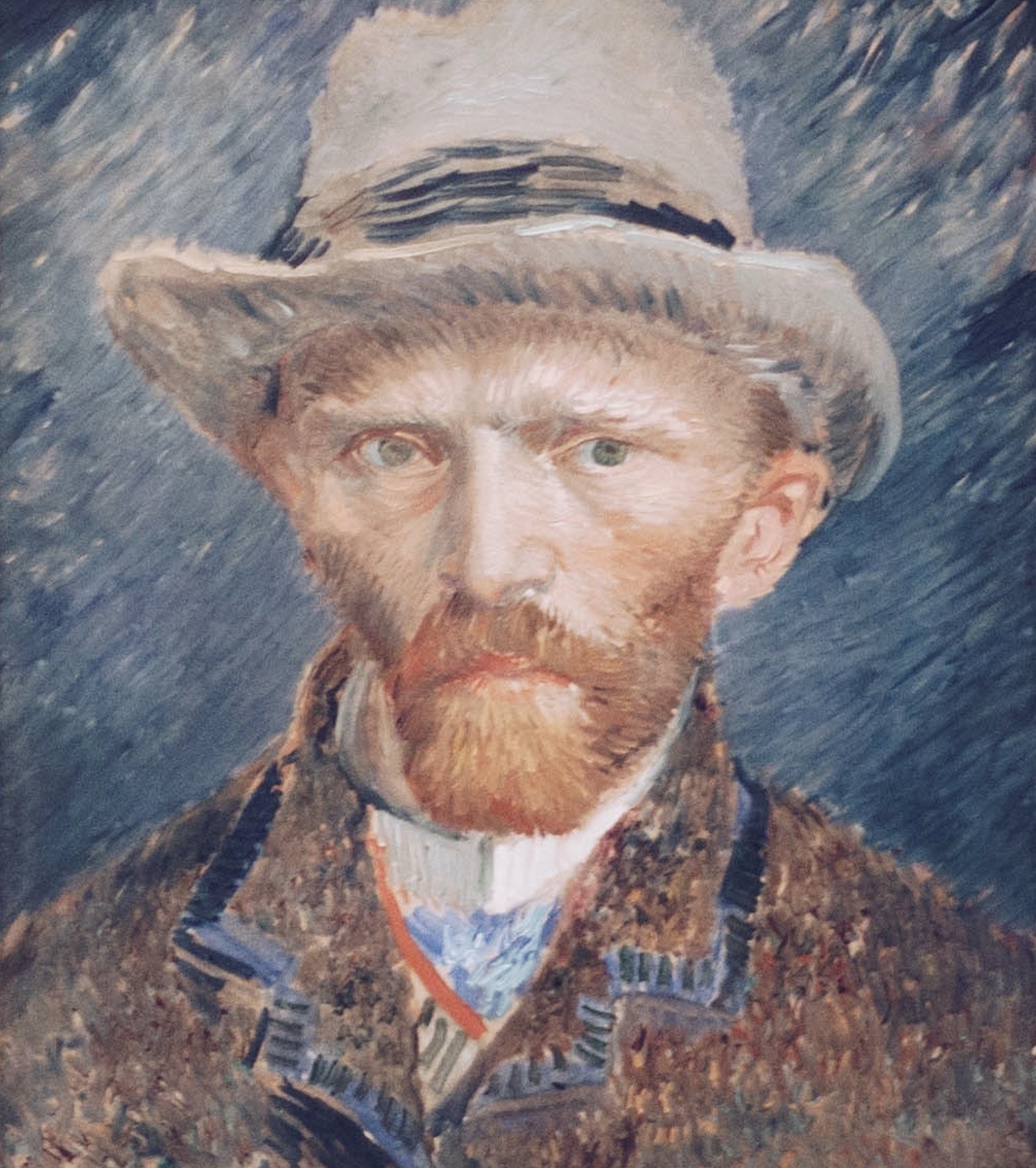 Self-portrait 1887. 'Original is hanging in the Rijksmuseum Amsterdam (Unsplash).