DIY Dad: building a hedgehog hotel with my son

Ben, a.k.a 'DIY Dad', thought it would be nice to build something with one of his small sons, not just for him. So together they spent a sunny but chilly afternoon building a hedgehog hotel. 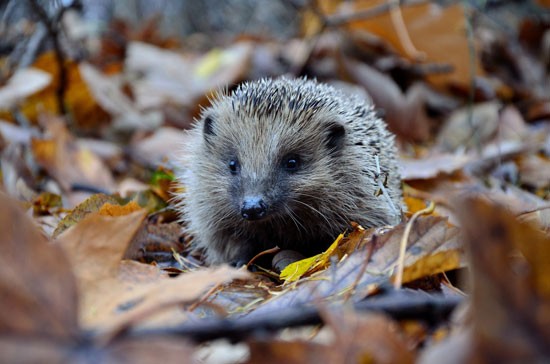 “Dad, can we build something?” my 7-year-old son asked me one day.

“Of course,” I replied, scrolling on my phone and not really paying attention.

A few days went past and he asked me again, and this time I wasn't on my phone so I answered him properly.

"OK. Why don't we make a hedgehog hotel?”

I'd been reading just the other day about how hedgehogs are at risk of extinction if we don't give them a helping hand.

My son squeaked and jumped up and down at the idea, so I knew it was a good suggestion. I'm not entirely sure what the words 'hedgehog hotel' conjured up in his 7-year-old mind – swimming pools, balcony views, black tie award ceremonies? Regardless, he was excited by the prospect and that was the main thing.

I have quite a lot of children, and I rarely make anything with them, I tend to make things for them.

If I want to actually complete something properly, I usually find having little hands and endless random questions a distraction.

However, this time I thought it would be nice to actually involve them in making something with me, spend some quality father-son time together. It would be great, right? I mean, you see this sort of thing in the movies all the time don't you, and the dads look like heroes! Well, that was going to be me this time.

Our first task was to do a little bit of research. We didn't need to go very far - www.rspb.org.uk/get-involved is an excellent resource and is beautifully presented. We supplemented this with a visit to www.hedgehogstreet.org which is also really good with lots of useful information. After no time at all we were experts!

Hedgehog numbers are in decline in Britain and Europe because of our modern way of life. But with a little bit of help from us, maybe we can reverse the decline.

Hedgehogs usually hibernate from October/November through to March/April.

It's not too much effort to provide them somewhere safe for the winter. They mainly eat worms, beetles, slugs, caterpillars, earwigs and millipedes, but will sometimes eat carrion, frogs, baby rodents, baby birds, birds’ eggs and fallen fruit. If we want to put some food out for them, apparently meat-based dog and cat food, hedgehog food, or cat biscuits are good. 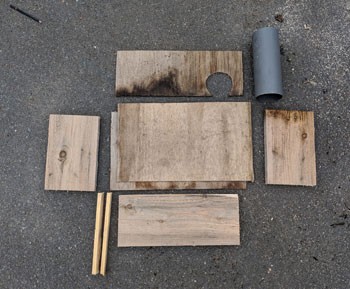 A few pieces of wood & a piece of pipe

Armed with knowledge, we headed out to make a start. Fortunately we didn't need much in the way of materials; some pieces of wood (suitable to go outside), some nails and screws, and a small piece of pipe. Tool-wise it was a hammer, normal saw and electric jigsaw, tape measure, and screwdriver.

What we were going to make was simply a wooden box into which we would put some leaves. It wasn't quite that simple, however, and there were two key features of this box that we had to include in its construction: 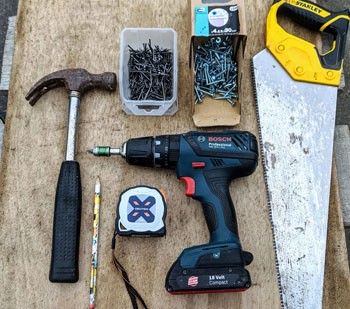 Obviously I wasn't going to let my small son use the saw, so I got him to help me measure the wood. I asked him to put a line with the pencil at the 30cm mark, and, using the tape measure, he dutifully made a wiggly line on the wood. He repeated this for all the measurements.

To prevent him from getting bored I made it sound like what he was doing was very important work.

He then held the overhanging parts of the wood I'd put onto the workbench to cut with the saw. He wasn't keen on the splinters so I let him ride his bike during this bit. I took the opportunity to cut the hole out of the front panel using my jigsaw.

Once we'd measured and cut all the parts it was a case of assembling everything. I chose to nail everything together except the roof, so part-hammered the nails in so my son could finish them off.

He did pretty well with the hammer actually, neither bending the nails nor smashing his face in.

The next job of collecting a bucketful of dry leaves was totally his responsibility, and he happily went off around the garden to collect as much as he could. It didn't take him long.

He then put what would be the hedgehog's bedding into the wooden box, spreading it around nicely.

The penultimate task was to attach the entrance pipe tunnel. To do this I simply wrapped the end of the pipe with duct tape until it was a snug fit in the opening I'd cut earlier with the jigsaw. It was what we call in the industry 'proper wedged in'.

The last construction job was to screw the roof in place.

Once that was done it was complete! 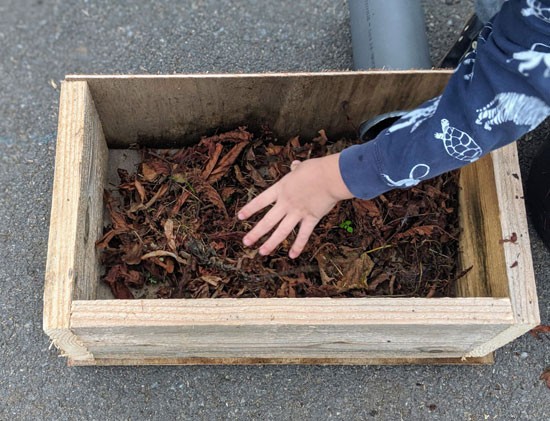 A nice bed of dry leaves 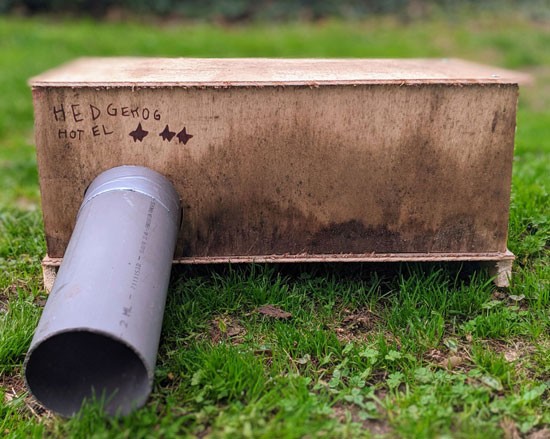 The final small but essential jobs were to write the hotel sign above the door and find a suitable place to put the animal accommodation.

Whenever there were tasks that weren't dangerous or too complicated I'd get my son to do them; him being involved was the whole point after all.

He did really well with both jobs, writing in his best 7-year-old handwriting, and finding a quiet place in the undergrowth behind an old corrugated iron shed which we think the hedgehogs will find nice and peaceful.

The secret to being able to do this project with my son without getting frustrated or annoyed was that I wasn't particularly precious about the finished product.

If I'd been building something complicated and essential it would have been a real challenge, but this was his project and it wasn't too hard, so I was able to keep it fun for him.

It's mid-autumn now so we'll have to wait and see if any prickly guests choose to stay at our hotel, but even if they don't, just making it was fun for both of us. 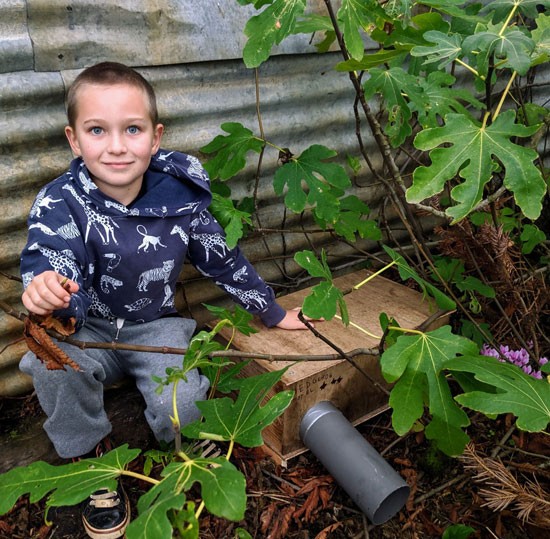 A proud boy with his handiwork

If Ben has inspired you to get out into nature and do something crafty, take a look at our wildlife & nature conservation courses. And if you fancy having a go building a hedgehog hotel - or anything out of wood - but aren't sure you've got the skills, go on a wood course and learn something new; it'll be useful and fun!