Ancient Treasures   -  A journey into bead-making

By Eleanor Allitt, a craftswoman and teacher who runs beautiful fresco inspired bead making and jewellery courses near Leamington Spa.

Here she describes how she found inspiration for her creative work in ancient legends, far-travelled precious stones and... eggboxes! 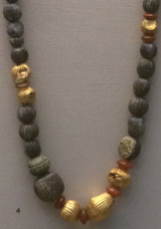 Many years ago a ceramicist friend gave me a necklace he had made. 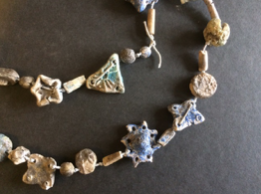 The beads were irregular shapes, with subtle incised decoration, and some had a  transparent blue glaze. They were made from clay, that most versatile of materials, and strung on a piece of blue linen string. I loved the simplicity and freedom of these randomly put together pieces.

For a long time the idea of making beads simmered away unattended at the back of my mind. However at last the  time to get started arrived and I looked for some guidance on YouTube, ever a good source of inspiration. I found, sure enough, that many people  had also experimented in a similar way producing some encouraging results. I started out with egg boxes as a  base, and experimented with various additives. As with all creative journeys the idea started to take on a life of its own, the results were encouraging, the resulting material strong and resilient.

At about that time I had been working on some illustrations for a book on the ancient Sumerian Myth of Inanna, and her descent into the underworld, a story which dates back to 2,500 BC. 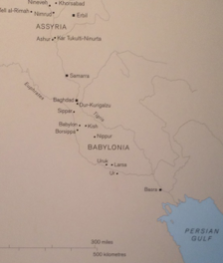 It is said to have taken place in Uruk, a town very close to present day Basra. 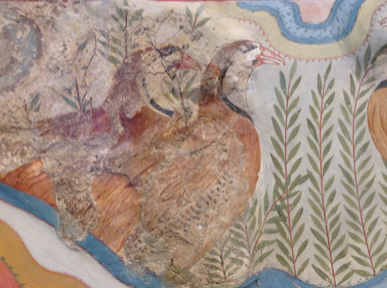 The legend is similar to the Greek story of Persephone. To cut a long story short, she hears her sister calling her from the Underworld.

At first she is resistant, but the call persists, eventually she makes the difficult decision to leave her happy family life and go on a life-threatening journey.  She endures many hardships, gives up everything she holds dear, and this indeed leads to the death of her former self. Thanks to the actions of her friend and her father she is rescued.  From then on it is onward and upward as she returns renewed to the Great Above. Daring to Discover: Inanna and her Descent into the Underworld, adapted and illustrated by Eleanor Allitt is available to purchase for £10 plus £2.50 postage and packing

I was also inspired by the frescos from Thera, Santorini,(2,500BC) ,the natural colours and bold simple drawing were memorable. I found I could recreate these faded colours and textures in my illustrations, it was a joy to experiment putting them together.

All this had led to many visits to the British Museum to see artefacts relating to her story, The necklaces had particularly caught my eye. 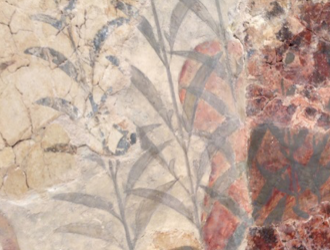 It was interesting to note that there are few precious stones or minerals to be found in Sumeria, a land famed for its marshes and mud. The commodities from which the

beads had been made came from faraway places, eg lapis lazuli from Afghanistan, Carnelian from the Indus valley or Iran, and gold from a variety of places such as Turkey, Iran, or Egypt. Trade produced prosperity. Gold was highly favoured for its spectacular appearance, in addition to its malleability.

It is also possible that these rare stones were believed to embody certain magical properties.

Ancient Sumeria is often referred to as the cradle of civilisation for this is where numerous inventions were made, and where a high degree of craftsmanship was developed.  Most famously  they invented  the wheel, and cuneiform writing, but also sailing boats, the arch, metal cooking pots, chisels, hammers, and  saws. All these achievements  led to increasing social diversification, and in turn to the use of jewellery to show wealth and prosperity. 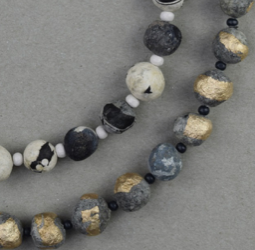 But now, back to the beadmaking, I continued my experiments.  I loved the age-old battered buried treasure look. After much deliberation I bought a linisher, that is, a machine with a moving sanding belt, - just the thing to distress the beads and make them look as if they had been 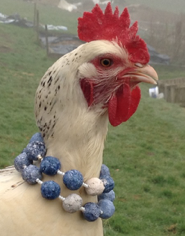 excavated from an ancient tomb.

Now I show my work in Open Studios, in Offchurch, near Leamington Spa, and there is a necklace page on my website. I also supply several galleries.

I run regular bead making and jewellery courses for small groups in my house, it is great to see people enjoying themselves creating something so individual and beautiful.

As the chickens have been the inspiration for the basic material for these beads I think they deserve to wear a necklace don’t you? 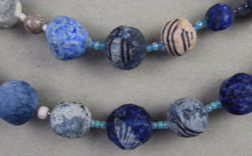